Weiss’ latest book, “The Woman’s Hour: The Great Fight to Win the Vote,” chronicles one of the greatest political battles in American history: the ratification of the constitutional amendment that granted women the right to vote. It tells the story of American women’s seven-decade struggle to win the ballot, as it all came down to a pitched battle in Nashville, Tennessee, to gain the final state needed to ratify the 19th Amendment. The central character is Iowa State alumna and national suffrage leader Carrie Chapman Catt.

The book of narrative nonfiction has been hailed as a “riveting, nail-biting political thriller” with powerful parallels to today’s political environment. “The Woman’s Hour” was a Goodreads Readers’ Choice Award winner, short-listed for the 2019 Chautauqua Prize, and received the American Bar Association’s highest honor, the 2019 Silver Gavel Award.

As part of her visit to Iowa State, Weiss spoke about the lessons of the woman suffrage movement and the relevance of its themes in 2020, as the nation marks the centennial of the ratification of the 19th Amendment. She delivered her talk, “The Woman’s Hour,” at 1 p.m. in the Great Hall of the Memorial Union on Iowa State’s central campus, as part of the Catt Center’s commemoration of the centennial. Weiss’s presentation is free and open to the public.

“Carrie Chapman Catt was an extraordinary leader in the fight to expand our democracy and I’m especially honored to be able to speak about her role in the suffrage movement at her alma mater, Iowa State,” Weiss said.

Weiss’ magazine feature writing has been recognized with prizes from the Society of Professional Journalists, and her by-line has appeared in major national publications, as well as reports and documentaries for National Public Radio and Voice of America.

Weiss’ long-form writing garnered a Pushcart Prize “Editor’s Choice” award, and she is a MacDowell Colony Fellow. Her first book, “Fruits of Victory: The Woman’s Land Army in the Great War” was excerpted in the Smithsonian Magazine online and featured on C-Span and public radio stations nationwide.

Weiss holds a graduate degree from the Medill School of Journalism of Northwestern University. She has worked as a Washington correspondent, congressional aide and speechwriter, magazine editor and university journalism instructor.

She says she votes in every election.

The Catt Center has sponsored this annual speaker series since the fall of 1996 through the generous support of donors. It was established in 1995 to honor the Iowa native and longtime political and civic leader. Mary Louise Smith – the first woman to chair the Republican National Committee – was a mentor, friend and role model to many in the world of politics and civic, government and community affairs.

The purpose of the chair is to bring nationally known political leaders, scholars and activists to Iowa State to enrich the experiences of students and educate citizens about the role of women in the political process.

Weiss’ keynote was tied in with other celebrations of this historical anniversary.

The Catt Center represents Iowa State University on a statewide coalition that is planning a yearlong celebration of the centennial of the ratification of the 19th Amendment.

“The Catt Center is honored to join women leaders from across the state to celebrate this historic milestone,” said Karen Kedrowski, director of the center.

The theme of the year’s events is “Hard Won. Not Done.” 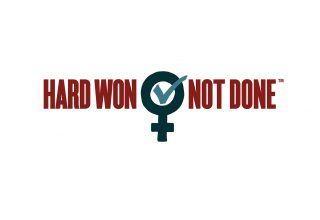 “We chose this slogan to communicate to young people especially that securing women’s right to vote was difficult, and the struggle for full equality continues today,” said former State Representative Doris Kelley, chair of the 19th Amendment Centennial Commemoration Committee.

The Catt Center and Iowa State University hosted the statewide kickoff at the Memorial Union on Friday, Feb. 14, 2020, which was the centennial of the founding of the national League of Women Voters by Carrie Chapman Catt.

With a Humanities Iowa grant of $11,007, the kickoff also featured a performance of “The Yellow Rose of Suffrage” by Iowa State University theatre professor emerita Jane Cox; a display of suffrage memorabilia; breakout sessions; and performances of suffrage songs and selections from a new musical “The Suffragist.”

The kickoff was free, open to the public, and promoted understanding of women’s suffrage history, including the often-overlooked contributions of African-American, immigrant and working class women. It also placed the suffrage story into the larger context of the expansion of voting rights.

Events will continue throughout the 2020 calendar year. They include providing a suffrage wagon for local summer festivals and parades and at the Iowa State Fair; local programming by colleges and universities, public libraries and local historical societies; a performance of “The Suffragist” at the University of Northern Iowa in June; dedications at designated Division I college women’s basketball games; commemorative resolutions passed by state and local governments; art displays; a women’s history calendar distributed by local credit unions; and other special events and activities. The year will culminate with a closing celebration in Coralville hosted by the Iowa Women’s Foundation in October.

Member organizations include the League of Women Voters of Iowa and its local chapters; the AAUW of Iowa; the Iowa Office on the Status of Women; 50-50 in 2020; Women Lead Change; Iowa Women’s Foundation; the 19th Amendment Society; NOW; the Iowa chapter of the Daughters of the American Revolution; NEXUS Women’s Executive Alliance; the University of Iowa; the University of Northern Iowa; Drake University; and Grinnell College.

For more information about the centennial celebration, to make a donation, and to view the calendar of events, please visit the committee’s website at https://19th-amendment-centennial.org/.