Nichola D. Gutgold speaks on the power of representation

Gutgold began her presentation with an anecdote that highlighted the role that representation – “when we can see ourselves in people that do things that we think we might want to do” – has in increasing the likelihood that people will take on challenges such as running for office.

In her presentation, Gutgold discussed the campaigns of not only the six women who ran for president in the 2020 election, but several other women whose earlier candidacies paved the way for those six women, including Margaret Chase Smith, a Republican senator from Maine who ran in 1964, and Shirley Chisholm, a Democratic congresswoman from New York who ran in 1972.

Gutgold shared that in Chase Smith’s announcement speech at the Women’s National Press Club, she stated that the most persuasive reason she found for running for president was that she would be paving the way for a woman in the future to become president. Gutgold said that Chisholm shared a similar sentiment, that she was running not necessarily to get in the office but to be in the race and show that she met the qualifications for the presidency. Gutgold said that both Smith and Chisholm ran serious campaigns, yet were portrayed as symbolic candidates at best.

“You can see right there that she stands out, right? You can definitely see who the woman is. She’s in the red suit and all the other people are in the political uniform,” said Gutgold, adding that the difference in appearance can be a drawback to women candidates.

When discussing the candidacies of Hillary Clinton, Gutgold quoted from Clinton’s 2008 announcement video – “I am in and I am in to win” – and how important that statement was. She said, “That might seem like just campaign rhetoric that we hear all the time. But in fact, that is such an essential line especially for a woman candidate, because so often when women run for president the press and the public want to cast them as vice presidential possibilities.”

The 2020 election saw a record number of presidential candidates, including a record number of women candidates. Gutgold explained that this was significant because the women were not “that one novel candidate” that could be easily discounted. Instead, voters could see that the women were different people with different backgrounds and experiences, and they did not hold the same positions on the issues.

After discussing the campaigns of each of the six women, Gutgold said, “I absolutely believe that having six women in the presidential race in 2020 changed the rhetoric of women in presidential politics.” 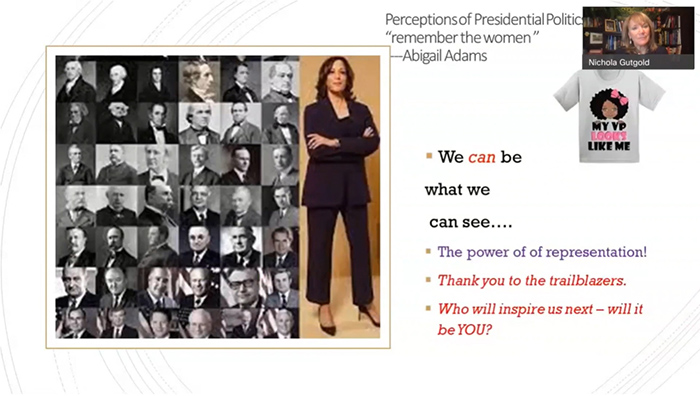 The lecture was sponsored by the Carrie Chapman Catt Center for Women and Politics and the ISU Committee on Lectures. A recording of Gutgold’s lecture is available on the Lectures Program website for viewers with an Iowa State login.