Proportion of women candidates in Iowa reaches all-time high, but room for improvement

Women’s representation as general election candidates in Iowa’s federal and state elections has increased slightly in 2022, according to the Carrie Chapman Catt Center’s latest report. Marking an all-time high, women make up 35.94 percent of candidates in 2022, compared to 35.17 percent in 2020. This gradual upward trend follows the steep jump from 2016 to 2018 when the proportion of women candidates increased by nearly 8 percentage points. 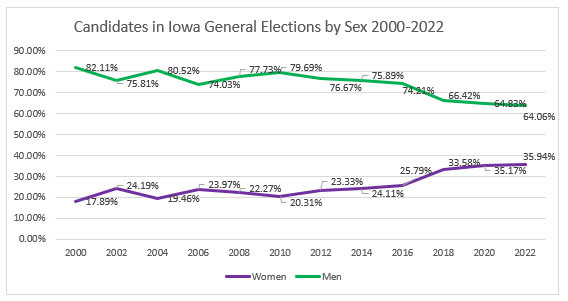 “The good news is that the increase we saw in 2018 had held, and we haven’t seen a decrease to pre-2018 numbers,” said Kelly Winfrey, coordinator of research and outreach at the Catt Center.

Iowa’s U.S. Senate race is between two men, Chuck Grassley (R) and Mike Franken (D), but women make up 62.50 percent of Iowa’s candidates for the U.S. House of Representatives. First-term Republican Representatives Mariannette Miller-Meeks and Ashley Hinson are being challenged by Democrats Christina Bohannan and Liz Mathis in the 1st and 2nd congressional districts, respectively. Cindy Axne (D) is running for a third term against state senator Zach Nunn (R).

“It’s great to see so many women running, but we still have a long way to go to reach gender parity,” Winfrey said.

Overall, women fared better in primary races than men, with 86.67 percent of women and 72.02 percent of male primary candidates advancing to the general election. Most noteworthy is that in contested primary races, women won 58.62 percent of the races and men won 37.21 percent. A detailed report of primary election results is available from the Catt Center.

The general election is Tuesday, Nov. 8, 2022. For information on voting in Iowa, visit the secretary of state’s website.