This year could be a record-breaker for Iowa, with women making up the majority of general election candidates running for federal office.

Three of the five federal races are between two women. Incumbent Joni Ernst (R) is competing against Theresa Greenfield (D) to represent Iowa in the U.S. Senate. In Iowa’s 1st Congressional District, Abby Finkenauer (D) is defending her seat against Ashley Hinson (R), and two women, Rita Hart (D) and Mariannette Miller-Meeks (R), are vying for the open seat in the 2nd district. Cindy Axne (D) also defends her 3rd district seat against a male challenger, David Young (R), who held that seat from 2015-2019.

Ernst became the first woman to represent Iowa in Washington, D. C., in 2014, and in 2018 Iowa elected its first two women to the U.S. House of Representatives, Axne and Finkenauer.

“There aren’t as many women running for state office in Iowa as in 2018, but there are more running for federal office and winning,” said Kelly Winfrey, coordinator of research and outreach at the Carrie Chapman Catt Center for Women and Politics. “It is entirely possible that Iowa’s congressional delegation will be 80% female,” said Winfrey.

“The good news is women continue to win at equal or better rates than men,” said Winfrey. Women primary candidates won nearly 84% of their races compared to 77% of men winning. Many primary races are unopposed, but of those with opponents, women still faired significantly better than men. 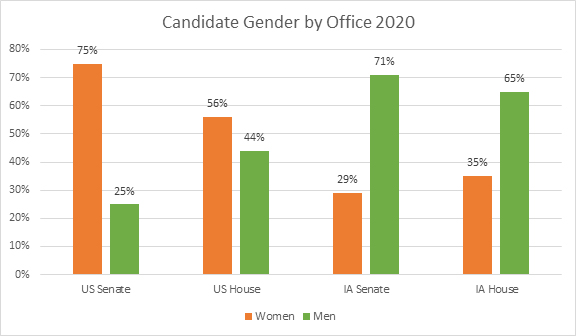 The general election will include 83 women running for federal and state legislative offices. That number includes women running as Democrats, Republicans and third-party candidates.

For more information on the gender makeup of primary and general election candidates, visit the Catt Center’s Women in Iowa Politics Database.