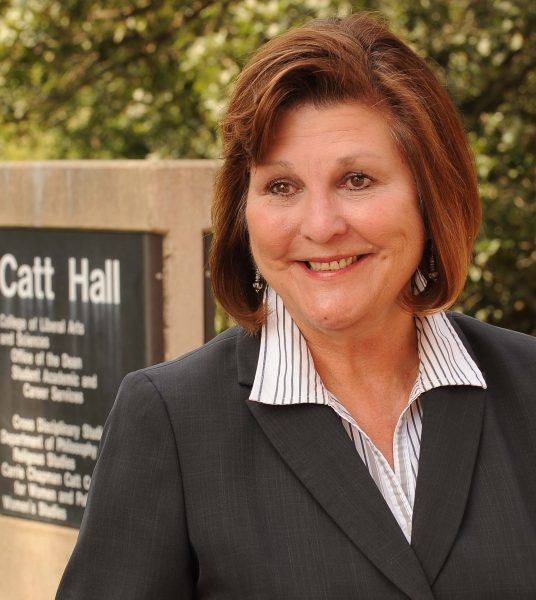 Dianne Bystrom, director of the Carrie Chapman Catt Center for Women and Politics, has been awarded a College of Liberal Arts and Sciences Institutional Service Award.

The college will recognize Bystrom’s achievement at the LAS Fall Convocation on Thursday, Sept. 11, at 3:30 p.m. in the Sun Room of the Memorial Union.

“I’m honored to have been recognized by the college for my service to Iowa State University,” said Bystrom, who has been director of the Catt Center since 1996. “Service to one’s community is something that I have advocated in both my professional career and personal life.”

Each year, LAS celebrates the outstanding accomplishments of its faculty and staff with awards presented by both the university and the college. Staff members are honored for demonstrating excellence in their position responsibilities, which may range from general departmental support to academic advising to information technology services.

In addition to directing the Catt Center for the past 18 years, Bystrom has taught courses on leadership, women and politics, and political campaigns for women’s studies, political science and speech communication as an adjunct assistant professor of political science. She has been a key player in providing leadership training and development opportunities for ISU faculty, staff and students and – as a frequent commentator on women’s and political issues for state, national and international media – helps garner extensive coverage for Iowa State.

Professors Mack Shelley, political science and statistics; Elizabeth Hoffman, economics; Gloria Jones-Johnson, sociology and women’s studies, and Steffen Schmidt, political science, submitted Bystrom’s nomination packet along with letters of support. They noted that Bystrom has not only been instrumental in developing the Catt Center and advocating the advancement of women in politics across the state and nation, but has also been a pioneer for women’s leadership programs across the university.

“Dianne’s job is to provide institutional service, but she goes so far beyond the basic demands of her position to bring true distinction to the college and the university,” said Hoffman, who hired Bystrom when she was LAS dean in 1996.

“Bystrom has been one of the most visible analysts and commentators on politics at Iowa State University. Her reputation as the ‘go to’ person is international and she has given the university enormous visibility and prestige” Schmidt wrote.

“Dianne is a steward of a long legacy of dedicated women seeking to make change, and she keeps in mind their contributions and goals as she charts a new course for the Catt Center,” Jones-Johnson said.

Since 2000, Bystrom has facilitated the delivery of leadership development programs to Iowa State faculty, staff and students by serving as project co-director of Shared Leadership for Institutional Change and as a member of the advisory boards for the Emerging Leaders Academy and Community Leadership and Public Service certificate program. She helped develop the curriculum of all three leadership development programs. Bystrom also helped organize the Women’s Leadership Consortium, which advises the Office of the Senior Vice President and Provost on women’s leadership opportunities and development.

Her current research interests focus on (1) the styles and strategies used by female and male political candidates in their television advertising, websites and speeches and (2) the coverage of women candidates and political leaders by the media. She is a co-author, co-editor and contributor to 19 books – including alieNATION: The Divide and Conquer Election of 2012 (forthcoming); Gender and Elections (2014, 2010 and 2006); Women and Executive Office: Pathways and Performance (2013); Media Disparity: A Gender Battleground (2013); Communication in the 2008 U.S. Election: Digital Natives Elect a President (2011); Cracking the Highest Glass Ceiling: A Global Comparison of Women’s Campaigns for Executive Office (2010); Legislative Women: Getting Elected, Getting Ahead (2008); Gender and Candidate Communication (2004); Anticipating Madam President (2003); and Women Transforming Congress (2002) – and has written journal articles on women and politics, youth voters and the Iowa Caucus.