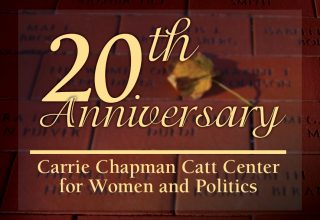 The Carrie Chapman Catt Center for Women in Politics – which was established on Sept. 23, 1992, with the approval of the Iowa Board of Regents – will celebrate its 20th anniversary with several events.

On Aug. 26, 2012 – Women’s Equality Day – Jane Cox, professor and director of theatre at Iowa State University, will perform her one-woman play, The Yellow Rose of Suffrage, at 2 p.m. at the Ames City Auditorium. The play illustrates the life and words of Carrie Chapman Catt, an 1880 graduate of Iowa State who devoted 33 years of her life to the women’s suffrage movement. A tireless organizer and campaigner, Catt served twice as president of the National American Woman Suffrage Association, including in its final successful campaign to ratify the 19th amendment to the U.S. Constitution granting women the right to vote. The performance is free and open to the public.

On Sept. 23, 2012, the Catt Center will mark its 20th anniversary with a celebration from 3:30 to 5 p.m. at Carrie Chapman Catt Hall on Iowa State’s central campus. The event – which is free and open to the public – will include anniversary cake and other refreshments as well as remarks by Executive Vice President and Provost Elizabeth Hoffman and a performance by the Yellow Rose of Suffrage singing group. As dean of the College of Liberal Arts and Sciences from 1993 to 1997, Hoffman was instrumental in supporting the Catt Center at its beginning and helped establish its Mary Louise Smith Chair in Women and Politics and Legacy of Heroines scholars program. She and her husband, Brian Binger, provide financial support to the Legacy of Heroines scholarship and internship programs.

A reunion reception and dinner for current and former students, staff and faculty; community members; alumni; donors and supporters affiliated with the Catt Center will be held on Friday, Oct. 26, during Iowa State’s Homecoming weekend. The events – which will be held from 5 to 8 p.m. in the Cardinal (reception) and Campanile (dinner) rooms of the Memorial Union – will be offered at-cost to those interested in attending.

The celebration will include an analysis of the 2012 election by CNN’s chief political correspondent Candy Crowley at 7:30 p.m. on Nov. 13 in the Sun Room of Memorial Union. Since 2010, Crowley has also served as anchor of State of the Union with Candy Crowley, a political hour of newsmaker interviews and analysis of the week’s most important issues. The lecture is free and open to the public.

To help celebrate the Catt Center’s 20th anniversary and provide support to the future delivery and enhancement of its various programs, please consider making a charitable gift: www.foundation.iastate.edu/cattcenter. These gifts will be used to support student leadership development, foster research on women and politics, bring prominent women leaders to campus, and encourage women and men to pursue careers in politics and public service.